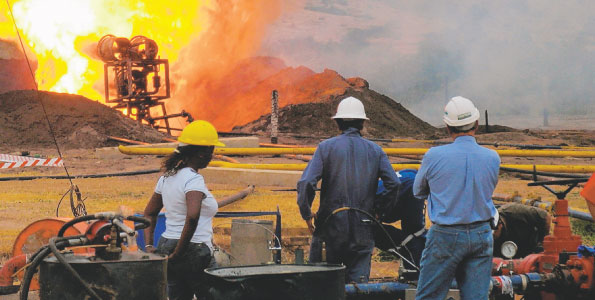 Uganda will formally announce the Final Investment Decision (FID) for the construction of a 1,445 km crude oil pipeline and the development of two oil fields on February 1, 2022. The announcement will be made at the historical Kololo Independence Grounds in Kampala.

FID is the point in an energy project in which the companies operating the venture sanction its development.

France’s TotalEnergies is leading a group of shareholders in the construction of a crude oil pipeline from Hoima in Western Uganda to Tanzania’s Tanga Port that will be the longest heated underground pipeline in the world.

TotalEnergies is also developing the Tilenga oil field, while China’s CNOOC is in charge of the Kingfisher Oil field.

The taking of the FID will end nearly 10 years of negotiations – most of them around the legal framework of the oil industry and financial implications – and set the stage for heavy investments in the oil industry as the country races to beat the deadline for achieving First Oil in the first quarter of 2025. 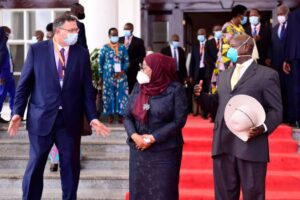 President Museveni and Tanzania’s Samia Suluhu talk to TotalEnergies’ Pouyanné after the the signing of the Host Government Agreement for the EACOP in April, 2021 at State House, Entebbe

The taking of the FID comes after President Yoweri Museveni is said to have assented to two critical legal frameworks – the East Africa Crude Oil Pipeline (Special Provisions) Bill, and the Public Finance Management Bill. The two laws have an impact on the investment in the oil industry.

At least $15 billion to $20 billion is expected to be invested in Uganda’s oil industry before the country starts producing oil. Already, a number of contracts have been awarded, although many of them were conditional. The signing of the FID means the conditional awards now turn into permanent awards.

TotalEnergies is the lead company for the crude oil pipeline project, with 62% shareholding. The Uganda National Oil Company (UNOC) and Tanzania Petroleum Development Corporation (TPDC) each own 15%. China’s CNOOC owns the remaining 8%.

The signing of the FID adds more impetus to Uganda’s own ambitions of building an oil refinery. The country is looking to build a refinery with a capacity to refine 60,000 barrels of oil per day. A substantial amount of this oil is expected to come from the Tilenga and Kingfisher oil fields.

Uganda’s petroleum resources remain at 6.5 billion barrels of oil equivalent in place with 1.4 billion barrels of this as recoverable resources. The Ministry of Energy and Mineral Development still continues to license additional areas for petroleum exploration in the country to increase on these resource volumes.

The country is currently negotiating with UNOC and Australia’s DGR Global Limited over exploration licenses for some oil fields. This is in addition to the ongoing exploration activities of Oranto Petroleum and Armour Energy in the Ngassa and Kanywataba contract areas respectively.