A file image of gold exploration in Karamoja

At least four government geologists are feared dead in Karamoja, North Eastern Uganda; having failed to return from the field where they were carrying out geologic mapping on Monday.

Mr Gerald Eneku, the Karamoja regional inspector of minerals told the Daily Monitor that the four geologists under the Ministry of Energy and Mineral Development were carrying out the surveys in Rupa Sub-county in Moroto District.

He says community leaders informed him that the four landed in an ambush of armed cattle rustlers. Reports says about 40 people have recently been killed at the hands of the rustlers.

A Ministry official, who preferred anonymity told this website that they were still awaiting the latest reports from the police and the army to ascertain the fate of the geologists.

Karamoja is significantly rich in minerals like marble, gold and gemstones but extensive exploration has not been carried out to establish the mineral deposits. 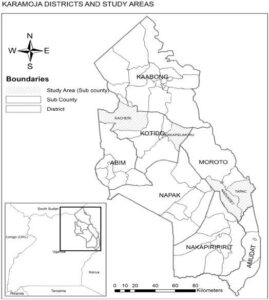 A map of Karamoja

Geologic mapping provides many types of information essential both in exploration for new mineral deposits and during subsequent mining.

The current ground mapping follows a recent airborne geophysical survey that had been delayed for over 10 years because of the insecurity in the Karamoja region.

This is a developing story.