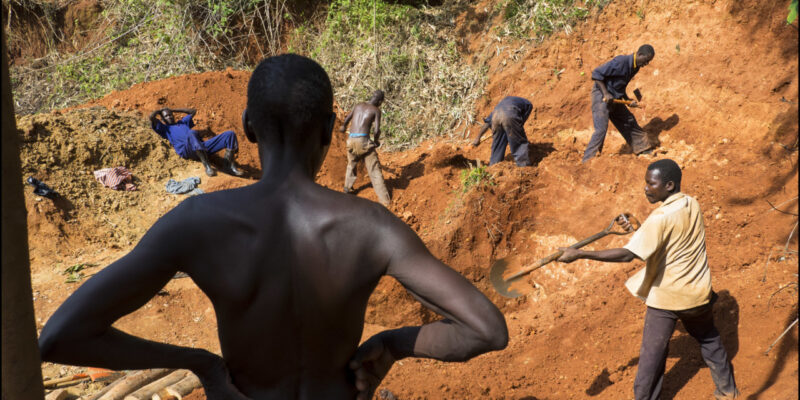 Artisanal mining is common in Uganda

Uganda will for the first time have a National Mining Company to manage the government’s commercial and participating interests in mineral agreements.

The provision is part of the Mining and Minerals Bill, 2021 which the Parliament passed on February 17, 2022.

The National Mining Company will hold a 15 per cent free equity in all large and medium mining ventures as well as have the right to pay up 20 per cent extra shares in the mining ventures at the commercial rate.

Emmanuel Otaala, the chairperson of the Committee on Environment and Natural Resources, noted that the mineral agreements and Production Sharing Agreements (PSAs) will apply to highly capitalized investment and complex mining.

“Application of these agreements should be limited to areas where the presence of minerals has been ascertained or quantified,” he said.

The new law was intended to provide a robust, predictable and transparent legal regime, improve mining and mineral administration and business processes, ensure efficient collection and management of mineral revenues, promote value addition to minerals and increase mineral trade, according to the Ministry of Energy and Mineral Development.

It would also seek to address emerging issues such as mineral certification, value addition, mineral revenue management and formalization of artisanal and small-scale miners among others.

However, in a series of tweets on its official account, the Uganda Chamber of Mines and Petroleum (UCMP), suggested that the legislative process may have been rushed, threatening investor confidence in the industry.

The private sector is mainly concerned with the free equity to the National Mining Company, the handing of licensing powers to the Minister of Energy and Mineral Development and the structuring of the PSAs among other provisions.

Bwesigye Don Binyina, the Executive Director, Africa Centre for Energy and Mineral Policy thinks the mining bill borrowed a lot from the petroleum sector, despite the disparities in the two sectors.

“The petroleum sector often uses a production-sharing contract, which is non-existent in the mining sector. We also have to be cautious when suggesting a ‘free-carry participation’ model in regards to the National Mining Company,” noted Binyina.

He is optimistic the bill will be amended further to address such concerns before the President appends his signature, for it to become law.

Other highlights in the bill include the provision for the participation of host communities in the entire decision-making chain of mining, which will help them to assess the expected royalties from within their boundaries.

The amended law also mandates applicants for exploration licences to provide a statement with proposals in regard to employment and training of Ugandans.

The parliamentary committee also recommended that regulation for exploitation of building substances like sand, clay and gravel, should be regulated in a separate law rather than being lumped together with minerals.

With minerals like copper, cobalt, the 3Ts and gold, the mining sector was contributing about 30 per cent to the in the 1960s, but this is now down to about 0.5 per cent; mainly contributed by artisanal and small scale miners. Experts have called for sustained, countrywide exploration to help ascertain the various mineral reserves so as attract larger investments in the sector.