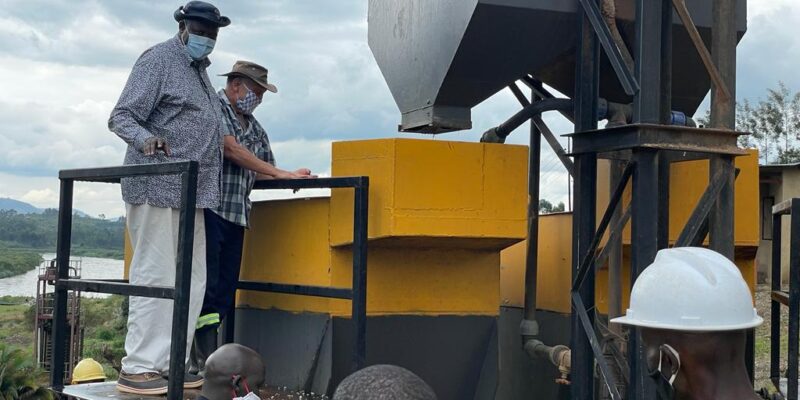 Peter Lokeris (L), the State Minister for Minerals visiting the African Panther Resources' tin mine in Isingiro in October 2021

Uganda’s mining industry has to wait until Monday, March 14, 2022 before finding out whether the ban on the export of unprocessed minerals will be lifted or not.

This is after a cabinet meeting chaired by President Yoweri Museveni on March 7, 2022 decided to postpone the decision to next week, after the Ministry of Energy and Mineral Development has provided more information about the mining sector.

This information will include the number of mines affected by the ban, the number of people they employ, how much they pay in taxes and how much the industry realizes in foreign exchange earnings. The ministry is also expected to estimate how much the country would benefit were it to process its minerals locally.

Export of unprocessed minerals was initially banned in 2011, following a Presidential Directive. The rationale was that adding value to the minerals before export would boost employment, increase revenues and foreign exchange earnings.

Occasionally, the embargo has been lifted temporarily for some minerals, following lobbying by miners or after advice from the Directorate of Geological Survey and Mines (DGSM), the technical arm of the Ministry.

Importantly though, there has hardly been any significant export of unprocessed minerals in the last 10 years.

Industry observers have for long argued that the export embargo on some minerals is excessive since deposits remain unknown because conclusive exploration has not been carried out. As such setting up smelters and refineries when deposits were unknown would not make business sense.

In a detailed paper shared at a Presidential Investors Roundtable (PIRT) meeting in December 2021, the miners demonstrated through various statistics, best practices and examples from across the world why Uganda is better off lifting the ban.

They argued, that lifting the ban would in fact lead to the development of the mining and minerals sub-sector, by attracting exploration companies, which in turn would attract mining companies after making commercial discoveries.

With the ban lifted, there would be no need to smuggle out minerals to neighboring countries like is the case, currently.

The mining industry employs about 5 million people both directly and indirectly. But over 37 per cent of the 500,000 people employed directly have lost their jobs due to the export ban.

Worse still, some companies have shut down operations fully while others are on the verge of closing down as well because of the embargo. For African Panther Resources (APR), which runs the Kikagati tin mines in Isingiro, a failure to honour their supplier contracts has seen it part with extra charges in fines.

This is not the first time that the decision to unconditionally lift the ban is delayed. That is why the miners are keeping their fingers crossed ahead of the Monday cabinet meeting.

UNOC to recruit another 45 workers