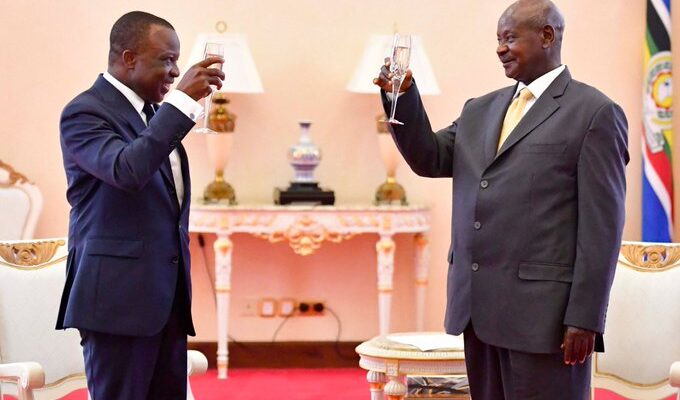 Museveni and Jules-Armand Aniambossou, the Ambassador of France to Uganda

President Yoweri Museveni has thrown his hat in the ring over the pursuit for money to finance Uganda’s oil project, telling European countries that a friend in need, such as Uganda, is a friend indeed.

Russia, which has been at war with Ukraine since February 24, 2022, is the world’s largest exporter of gas, accounting for about 45 per cent of the European Union’s imports in 2021. Its invasion of Ukraine has however since prompted the EU to call for the end of its member countries’ dependency on Russian petroleum products. It is such sentiments that Museveni is appealing to.

Museveni’s thoughts were carried in an OpEd he authored for The Telegraph, a UK newspaper.

They come amidst continued demands to global banks by green energy campaigners like #StopEACOP to stop the funding of Uganda’s oil and gas developments.

The East Africa Crude Oil Export Pipeline (EACOP) is a 1,443km crude oil export pipeline that will transport Uganda’s crude oil to the Tanga port in Tanzania. Stopping or delaying its construction would therefore derail Uganda’s oil and gas mission.

At least fifteen major banks have already said they will not finance the pipeline. Relatedly, seven world leading insurers have also indicated that they will not insure the EACOP project over Environmental, Social, and Governance (ESG) concerns.

For Museveni, this stance is absurd seeing that the demand for oil and gas remains as high as ever; hence his call for a rethink on how the transition to green energy is made.

Speaking at last month’s Oil and Gas Convention in Kampala, both Philippe Groueix, the General Manager TotalEnergies EP and Patrick Mweheire, the Chairman, Uganda Chamber of Mines and Petroleum (UCMP), spoke out against the campaigns against Uganda’s oil developments insisting that all the ESG criteria was being met.

The United Kingdom’s Energy Secretary Kwasi Kwarteng recently ordered for a review of the fracking ban in England, a move Museveni hailed as significant as it considered the ‘wider picture.’

“In Africa, where the population is set to double by 2050, it is becoming increasingly clear that our energy needs cannot be met with a sudden shift to more expensive and less reliable solar and wind energy alone,” wrote Museveni.

He added: “African nations like Uganda see eye-to-eye with the West about the need to eliminate fossil fuels in the long term, and our broad energy strategy includes nuclear, hydro and biomass, as well as oil and gas.”

It is unclear whether Museveni’s plea will convince the financial institutions to rethink their stance.

For now, Uganda can only look at South Africa’s Standard Bank (via its Ugandan subsidiary Stanbic), Japan’s Sumitomo Mitsui Banking Corporation (SMBC) and the Industrial and Commercial Bank of China (ICBC) to mobilize sizeable funding for the development of the EACOP.