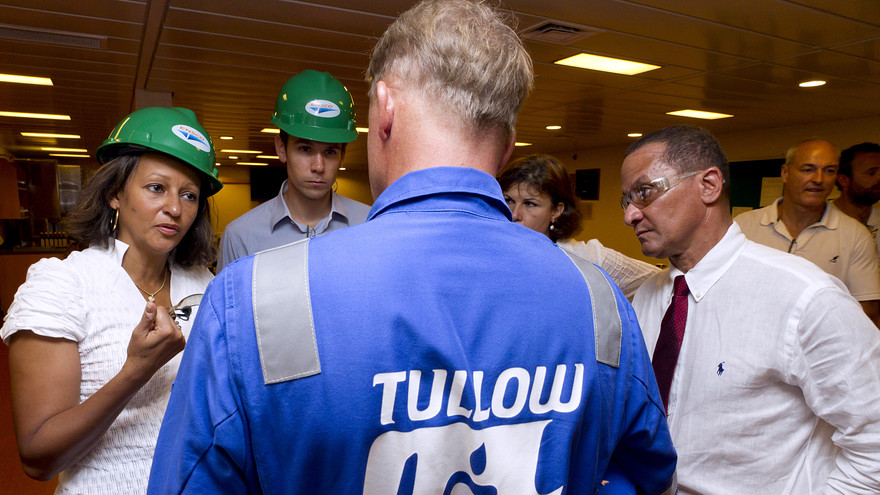 Following
a successful $650m debut bond issue in November 2013, Tullow’s balance
sheet is well-funded and the Group has unutilised debt capacity of
$2.4bn.

Tullow’s exploration programme added over 200 mmboe to
contingent resources in 2013 through important wells in Kenya and Norway
from an exploration expenditure of $1 billion. In line with Tullow’s
strategy, the exploration campaigns have now added an average of 200
mmboe per year to the Group’s Contingent Resources over the past seven
years.

As
previously disclosed, the Ghana National Gas Company’s onshore gas
processing plant will not be ready to receive Jubilee gas until 2H 2014.
The completion of a third gas injection well in Q4 2013 brought only
limited relief and further gas disposal options are being discussed with
the authorities in Ghana.

With resolution of these issues,
Tullow estimates that Jubilee field production will average 100,000 bopd
for 2014. These delays, which are not within Tullow’s control, do not
affect the recoverable reserves of the field. Furthermore, Tullow is
confident that once the gas processing facilities onshore are completed,
the Jubilee field will be able to produce to its full potential given
the field’s well capacity and the strong performance of both the
reservoir and the FPSO to date.

In Mauritania, the Fr�gate-1 well is expected to reach total depth of approximately 5,800 metres by the end of January 2014.

In
East Africa, Tullow separately announced oil discoveries at Amosing-1
and Ewoi-1 onshore Kenya and increased discovered resources for the
basin to over 600mmbo.

The announcement also outlines the
current ambition of the Government of Kenya and partners to reach
project sanction in the period 2015/16. There have been a number of
positive announcements from the Governments of Uganda and Kenya
regarding joint initiatives for a crude oil pipeline to the Indian
Ocean.

Progress is also being made with the Government of Uganda on approval for field development plans.

In
Kenya and Ethiopia, Tullow will continue exploration, appraisal and
testing activities in three of the ten frontier basins with some 20
exploration and appraisal wells and multiple flow tests planned over the
coming 18 months.

Tullow has completed the sale of its
Bangladesh assets and is awaiting Government consent to complete the
sale of its Pakistan assets. As previously announced, the sale of the UK
and Dutch assets is being restructured.

The process for
reducing Tullow’s stake and capital commitments in the TEN Project is
ongoing with proposals being evaluated. The TEN development project
remains on track for first oil in mid-2016.

Group working
interest production for 2013 averaged 84,200 boepd and production
guidance for 2014 is 79,000 to 85,000 boepd. This forecast accounts for
the sale of the Bangladesh assets.
Aidan Heavey, the CEO of Tullow, said:

“Tullow
is a stronger company at the beginning of 2014 than in January 2013. We
made good progress across the business over the past year despite
facing challenges within the oil and gas sector. Our operating cash flow
is $1.9 billion which funds our value creating exploration campaigns.
Our exploration successes in Kenya and Norway mean that Tullow is
meeting its resource addition targets and expects to deliver in excess
of 200 mmboe in 2014. We have an exceptional exploration portfolio and
will drill over 40 wells in the next 18 months in a wide-ranging
campaign. We continue to advance a pipeline of high quality development
projects in West and East Africa. 2014 is full of opportunities for our
business and the Board is confident that Tullow will have another strong
and successful year.”

Kenya-Uganda pipeline: Let`s get it right this time