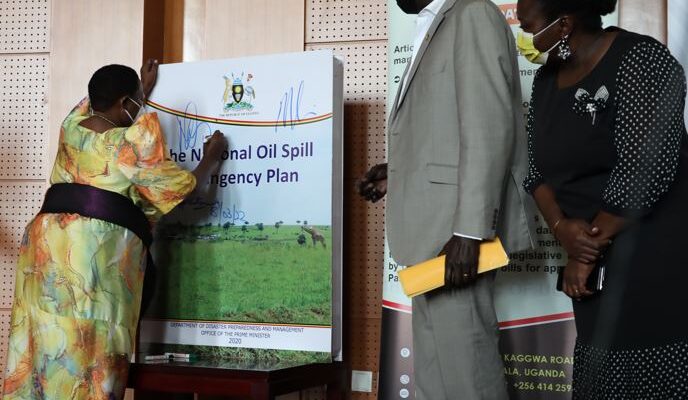 The PM, Nabbanja appends her signature to the Plan

The primary responsibility for oil spill prevention, preparedness and response in Uganda’s nascent oil industry will rest with the licensees and operators.

As such, following an oil spill incident, the licensee, operator or other person responsible for the oil spill will be required to immediately activate their oil spill preparedness and response system, in accordance with the “tiered response”.

This is contained in the National Oil Spill Contingency Plan (NOSCP) that was launched recently by Robinah Nabbanja, the Prime Minister. The NOSCP is a framework to guide national oil spill preparedness and response in the event of a spill.

The tiered response, as explained in the NOSCP, is defined by the three levels of preparedness and response in case of an oil spill, i.e. Tier 1, Tier 2 and Tier 3.

Nabbanja urged industry stakeholders to widely publicise the Plan and ensure that host communities of the oil projects are sensitised on the dos and don’ts in case of an oil spillage.

Environmental activists have continuously warned against oil exploration and production in the Albertine Graben region, where Uganda’s oil reserves are found. They have argued that the area is a sensitive ecosystem hosting Lake Albert plus the Murchison Falls and Queen Elizabeth National Parks in Uganda and the Virunga National Park in the Democratic Republic of Congo.

Oil activities, they claim, would, therefore, not only affect wildlife but also the thousands of people that depend on the healthy ecosystem for their livelihoods. At least 200,000 people depend on fish from Lake Albert, while nature tourism is one of the biggest foreign exchange earners for Uganda.

Only this week, Maxwell Atuhura, a member of Africa Institute for Energy Governance (AFIEGO), petitioned the Vatican, in the hope of obtaining Pope Francis’s public support against the Uganda oil project.

Pope Francis has repeatedly denounced the exploitation of people and nature.

However, Ruth Nankabirwa, the Minister of Energy and Mineral Development believes the NOSCP addresses all the fears of the activists insisting that the authorities have “left no stone unturned to ensure that our biodiversity concerns are well addressed”.

Dr. Barirega Akankwasa, the Executive Director at the National Environment Management Authority (NEMA), said: “In the unlikely event that an oil spill occurs, it is imperative that it is managed well, and our first action should be to contain and control the spill. Thereafter endeavor to respond quickly and in a well-organized manner.”

The legal framework requires that the Office of the Prime Minister (OPM), NEMA and PAU work closely together on several undertakings aimed at preventing, preparing for and responding to oil spill incidents.