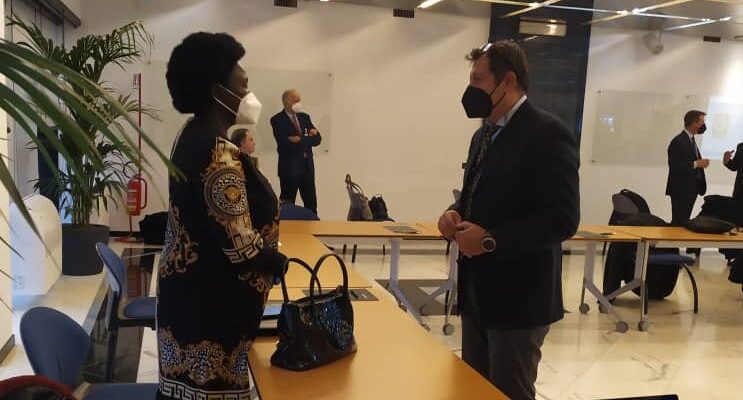 Uganda’s refinery project has been boosted by the recent final investment decision (FID) for the upstream projects of the crude oil pipeline plus the Tilenga and Kingfisher oil fields.

Ruth Nankabirwa, the Minister of Energy and Mineral Development, met executives from the Albertine Graben Refinery Consortium (AGRC) in Italy only three days after the FID announcement “to discuss the status of implementation of the Project Framework Agreement for the oil refinery” according to her official twitter handle.

It has now emerged that the FID for the upstream projects has been critical in fostering investor interest to fund the refinery project.

“Indeed there is now renewed interest in the refinery following the February 1 events. However until this interest is firmed up in form of letters of commitment, it can only be noted. That stage follows the conclusion of the long term agreements in about six months,” a highly placed source at the Energy Ministry told this website.

So far, the Front End Engineering Design (FEED) and the Environmental and Social Impact Assessment (ESIA) studies have been completed and are pending approval by the Petroleum Authority of Uganda (PAU). We understand that earlier concerns in the FEED were largely of a technical nature and most have been addressed.

Also negotiations of the long term agreements that will shape the project have commenced while sourcing for funding continues from both Uganda and the consortium investors.

“I want to commend the consortium for achieving the pre-FID performance bond milestones specifically the submission of the final FEED study last year and urge them to expedite and finalize the pending activities so that the refinery FID can also be taken,” said Nankabirwa.

Initially expected to be taken in February 2022, the refinery FID will most likely happen in the course of this year. The refinery will have the first call on the crude oil, hence the need to move in tandem with the other projects.

The Uganda Refinery Holding Company (URHC) a subsidiary of the Uganda National Oil Company (UNOC) holds a participating interest of up to 40 per cent in the 60,000 barrels of oil per day (bopd) refinery and its attendant infrastructure.

The $4b valued project will be funded through a debt to equity ratio of about 70:30. As the lead investor AGRC, will be responsible for raising the $2.8b debt (loan) for the project, while also contributing 60 per cent of the $1.2b in equity.