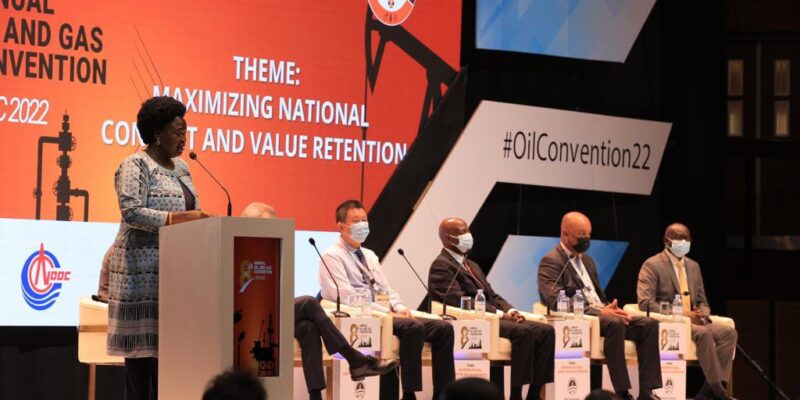 Nankabirwa speaks at the oil convention

Contracts worth over $600 million out of the $3.9 billion for the Tilenga and Kingfisher oil field projects have been committed to Ugandan companies, according to the Petroleum Authority of Uganda (PAU).

The revelation was made at the 8th Annual Oil and Gas Convention last week.

Organized by the Uganda Chamber of Mines and Petroleum, the summit was the first of its magnitude since the taking of the Final Investment Decision (FID) on February 1, 2022.

It focused mainly on the opportunities that have emerged in the last year as developments of the Tilenga and Kingfisher oil fields and the East African Crude Oil Pipeline (EACOP) begin to take shape.

For the Kingfisher project under CNOOC, the civil works, well pads and access roads construction contract is being executed by Excel Construction.

Patrick Mweheire, the UCMP Chairman who is also the regional chief executive for the Standard Bank Group for Eastern Africa, said the theme of the event ‘Maximizing National Content and Value Retention’ was deliberately chosen to help foster more Ugandan participation in the oil and gas industry; a prospect he called “the opportunity of a lifetime”.

At least $15 billion is expected to be spent in getting Uganda’s oil industry to the commercial production stage by 2025. Of this, it is hoped that about $5 billion will be retained in country.

“And if the linkages between oil and other sectors like agriculture, health, transport, housing, tourism and civil works are properly harnessed, the economy will retain an additional $8 billion,” Earnest Rubondo, the Executive Director PAU further said, during his presentation.

$980 million was retained in Uganda from the $3.5 billion invested during the first exploration phase and an addition $172m stayed in-country between 2017 and 2020 from a total investment of $462m.

Mweheire hailed the international oil companies (IOCs) and the main contractors for Tilenga – McDermott and Sinopec – for sharing very useful information at the convention.

“At least everyone now knows what opportunities are available and which ones have already been given out. About $4 billion worth of contracts have been awarded already but since these are $15 to $20 billion projects, there is still much more to come. Ugandans need to use this information to prepare adequately so that they continue winning themselves these contracts,” he added.