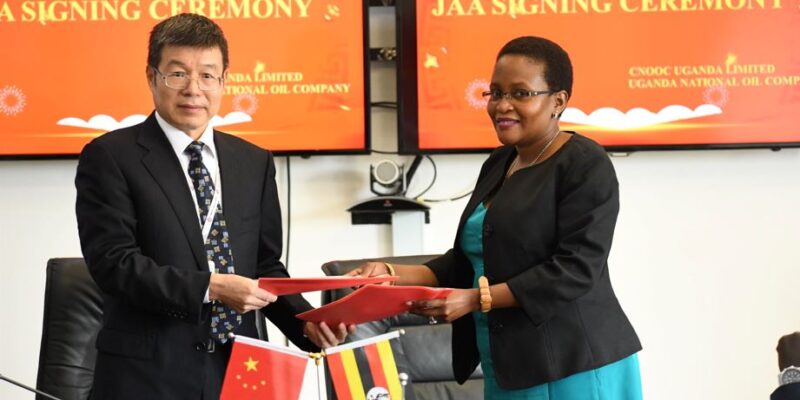 The Uganda National Oil Company has signed a joint application agreement (JAA) with CNOOC Uganda for the Pelican-Crane block in the Albertine Graben that is expected to culminate into an exploratory license.

The JAA signing at the CNOOC head office in Kampala is a continuation of a partnership that started in Beijing, China in September 2018, when the two companies signed a Memorandum of Understanding (MoU) to work together in exploration in the Albertine Graben.

“We are now going to jointly submit an application to the Ministry of Energy and Mineral Development (MEMD) including discussions expected to culminate in an exploration license for the block,” UNOC announced on its twitter account.

A statement after the 2018 MoU signing noted that the joint operation would ensure more crude oil is discovered in Uganda “as well as create an avenue for UNOC to grow its exploration capabilities and begin its journey towards a fully-fledged oil company able to perform operatorship roles.”

It had been hoped then that the licensing process would be completed by the end of 2018 and exploration kicking off in 2019. However, this never happened.

The JAA brings this aspiration closer to realisation. 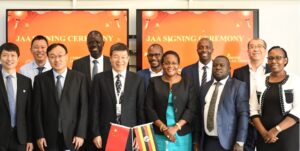 UNOC has struggled with limited funds to execute its mandate as noted in the Auditor General’s report for the 2020/21 financial year and this could have partly contributed to the delays towards its exploration ambitions.

The company proposed a capitalization plan to the Finance Ministry in its annual work programme and budget for the FY 2021/22 of UGX 914.18 billion. This money comprised of capital expenditure of UGX 304.08 billion and operating expenditure of UGX 129.10 billion.

The Pelican-Crane block is said to have high potential, being one of the biggest exploration blocks in the Albertine. Uganda’s petroleum resources currently stand at 6.5 billion barrels of oil equivalent in place with 1.4 billion barrels recoverable.

Only 15% of the Albertine is currently under licence.

Apart from the Pelican-Crane block, the MEMD has put up additional areas for exploration.

UNOC is also involved in a joint venture partnership with CNOOC in the Kingfisher Development Area in Kikuube district.