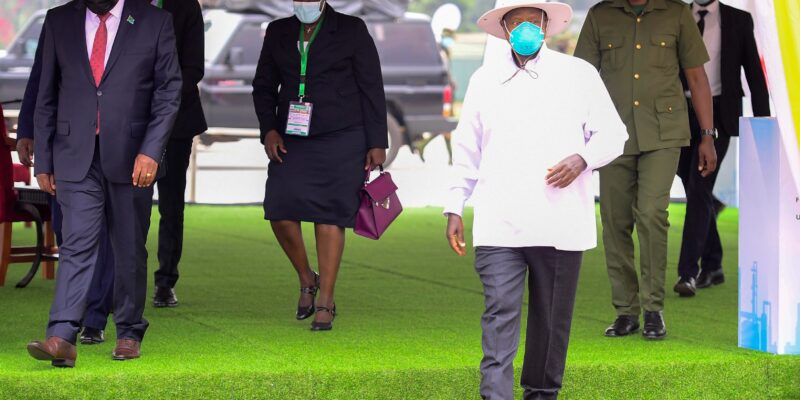 The taking of the final investment decision (FID) by the oil companies of TotalEnergies, CNOOC and Uganda National Oil Company (UNOC) on February 1, 2022 has officially marked the beginning of the detailed Engineering, Procurement and Construction (EPC) phase by the Joint Venture Partners that will culminate in First Oil in 2025.

FID is the point in an energy project in which the companies operating the venture sanction its development.

About $15 to $20 billion is expected to be invested in the construction of the East African Crude Oil Pipeline (EACOP) and the development of the oil fields of Tilenga and Kingfisher in the Albertine Region among other support infrastructure.

Contracts worth $ 6 billion for over 40 work packages for the Tilenga, Kingfisher and EACOP projects have been submitted by the licensees to the Petroleum Authority of Uganda (PAU) for approval before award.

Speaking at the ceremony, which took place at the Kololo Independence Grounds in Kampala, Ruth Nankabirwa, the Minister of Energy and Mineral Development said close to 160,000 jobs through direct, indirect and induced employment, would be created during this phase.

The taking of the FID has ended nearly 10 years of negotiations mainly around the legal framework and financial implications.

Patrick Pouyanne, the CEO and chairman of TotalEnergies, noted that time was of the essence, committing, to deliver the projects on schedule. 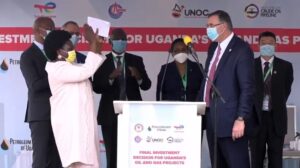 “Today’s events signify that Uganda’s oil and gas sector remains profitable, even amidst the challenges related to the volatile crude oil prices and the ongoing Covid-19 pandemic. Uganda’s journey has been steady and measured to ensure that by the time the country progresses to production, it is adequately prepared in terms of the legal and institutional framework, capacity of its people and infrastructure development,” said Irene Batebe, the Permanent Secretary, Ministry of Energy and Mineral Development.

President Yoweri Museveni and Dr. Philip Isdor Mpango, the Vice President of Tanzania, who represented Samia Suluhu Hassan, noted that the EACOP project would strengthen the strong partnership the two countries have enjoyed over the years.